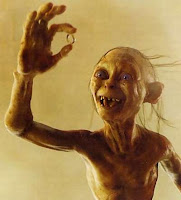 I’m a massive Lord of the Rings fan. Every year, I spend part of my holiday vacation rewatching the 12 hours of the blu-ray extended edition. Yes, I am just that big of a geek.

As much as Gollum has his precious ring, I, too have a precious. Its something that is very dear to me, mostly because of how little of it I have. Most of it each week is taken up with my job (50+), my commute (~10), sleeping (~56) and the rest to my family (basically the weekends). It is time.

The little free time I have usually is spent helping me unwind from all the other things going on in my life. I brew beer, but usually every other month or so. I work on my classic 1965 Ford Mustang (barely drivable since 2003) maybe 3 times per year (which is equal to how many times I take it out for a drive). I blog (you can see what my posting frequency has been like in the last month to see how poorly that has gone). Other than that, and a little web surfing, that’s about it.

What you’ll notice in there is that there is precious little time in my life for the things that really get me going… ideas. My work provides me the opportunity to do that more than what most people are allowed, but its still not very often. The times I find myself most frustrated with my job is when I realize my outlets for creativity are being stifled in the name of a project deadline or the endless stream of meetings.

My last 3 weeks have been just absolutely insane. No one real big thing has been driving it, but what I thought would be a slowing down, once I got most of my team in place, has really been nothing more than a massive speeding up as I get to do my real job instead of all the additional tasks I’ve been doing just to keep the wheels from falling off the proverbial car.

Its because of this that the latest entry of Rands in Repose hit so close to home. Let me give you some quotes that really hit home exactly why I feel as I do:

When an engineer becomes a lead or a manager, they create a professional satisfaction gap. They’ve observed this gap long before they became a lead with the question: “What does my boss do all day? I see him running around like something is on fire, but… what does he actually do?” The question gets personal when the now freshly minted manager begins to understand that life as a lead is an endless list of little things that collectively keep you busy, but, in aggregate, don’t feel much like progress.

Thing is, it isn’t just an engineer who feels this. When I was ‘just’ a business analyst, putting the last finishing touches on a requirements document prior to sign-off was such an amazing rush. Sitting down for a few hours to really knock the last rough edges off something, coming out with a well-formed, highly-usable set of requirements gave such an amazing sense of accomplishment.

Now, I have an endless parade of meetings, some of which I must be honest and tell you, I don’t even know what they are about before I walk into the room. This happened to me twice. Today.

You would not believe how many times your boss has walked into a meeting with absolutely no clue what is supposed to happen during that meeting. Managers have developed aggressive context acquisition skills. They walk into the room and immediately assess whose meeting it is, listen intensely for the first five minutes to figure out why they’re there all, while sporting a well-rehearsed facial expression that conveys to the entire room, “Yes, yes, I certainly know what is going on here”.

The fact that this had happened to me twice on the day I read this article was not lost on me. While its nice to realize that my boss probably suffers from this same affliction, its hard to go from someone who spent his day accomplishing so many things to being the person who helps other people accomplish things all day.

It is Rand’s solution that impresses me most… block out time to be creative; to focus on this every single day.

Starting at the beginning of February, I made a change. Each day I blocked off a precious hour to build something.
Every day. One hour. No matter what.
Every day? Yup. Including weekends.
A hour? Yup, 60 full minutes. More if I can afford it.

I wish it did not feel like an impossible dream. In the end, the author inspires me, but to what, I cannot say. One of his final thoughts speaks volumes to me, and I hope it does to you as well.

What would you create if you had eight uninterrupted hours - every month?