A while back, I helped my parents purchase a new PC for my mom to use. For the first time in my life, I helped someone purchase a pre-built machine. My parents had one of the original Apple IIe computers in the early 80s, but I really don’t count that as it was not my decision to purchase it. Since the mid-90s, I have been purchasing them barebones PCs which I would then customize and complete, sometimes with the help of a friend of my father’s.

No PC I have ever owned has been pre-built, although the new Intel-powered Apples are really tempting me. So, it was a sad day when my parent’s new Dell arrived. There are two good things about this happening: I did not have to take the time to research and assemble it, and that if anything breaks badly I don’t have to fix it, just ship it back to Dell.

When the PC arrived, my sister happened to be going to my parent’s house before I was, so she set it up for them so that when the installer came to connect the DSL service, the PC would be ready to go. The one thing I overlooked is getting their old data off their PC. Mom had been using this PC, or at least the data files, for a LONG time. I had upgraded the hard drive at least twice, each time installing the new drive, loading the OS, switching the boot sequence on the drives, then removing the data from the old drive before removing it from the system completely.

Since I could not crack open the Dell to do this, I began to think of ways around the problem. The CD drive was read-only so that was out. There were too many files to drop them all on a floppy. My home PC is maxed out on drives, and in a fairly old and unstable shape itself, so taking out the old drive and putting it into my PC wasn’t an option. Mom’s old machine did have 2 USB ports, but no one I knew had a USB drive. I guess my only option would be to purchase one.

The next obstacle was the shape of the PC itself. It was nearly dead. The thing took, no lie, 20 minutes to boot because of some strange hardware conflict that kept freezing the machine for 20 seconds at a time and then returning to the load process for another 5 seconds, before freezing again. This behavior was yet another reason I did not wish to move any components from Mom’s old PC to my, nearly as bad PC.

The problem with a USB drive is that there are no native drivers in Windows 98 for it. So, I had no way to get drivers to it except burn them on a CD. 777k of data file for a whole CD. Not my day. I would have used a floppy disk, but the floppy in my PC doesn’t work, so that option was out. Finding the drivers was not easy… in fact, I don’t think I ever did find them. If I did have the correct drivers, they definitely did not work.

At this point, my only option was to use a Linux Live CD, the latest version of Ubuntu, to load on the PC, attach the USB drive, mount the Windows partition and then copy over the files. This finally proved successful… after 5 hours of other options failing. Not my best day as a PC repairman.

But the data was retrieved and life was now good. All mom’s documents and her pictures were now safe and secure on my USB drive and backed up on a CD, burned from my PC. But what to do with the infuriating PC that had taken so many hours off my life? It needed to be repaid for its insubordination!

In addition to the video, here are some before and after pictures of the PC. 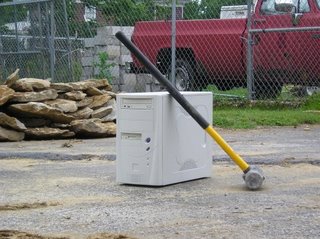 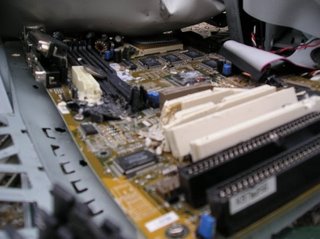 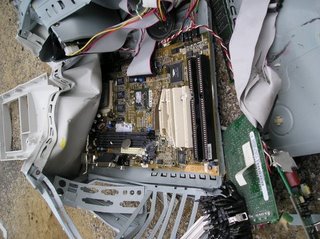 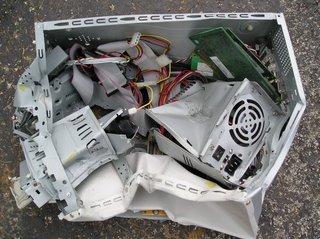 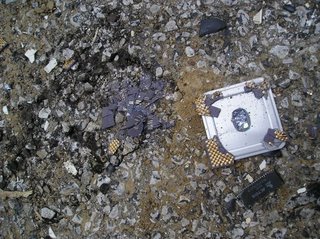 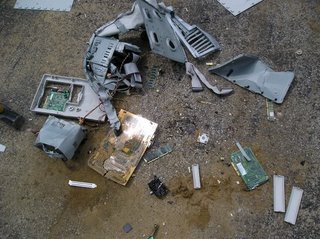