So, last week in our Monday team meeting, our boss tells us that at the IS All-Hands team on Friday, our team will be in the Spotlight focus time. Basically, its a 10 minute section where all the team members are introduced and a quick overview of our team’s role in the business is presented. Nice, I thought. I’ll get to stand up and give a wave to the audience, about 100 people or so, as my name is called. See, I’m junior man on the team as newest of the 10 employees and 2 managers.

It just didn’t quite turn out how I thought it would.

Mid-week, my boss tells me that she’d like me to get a bit of face-time in front of the crowd. Its nice being the analyst on a team of introverted programmers as they all run at the slightest thought of being required to talk with actual people! So, I agreed and it would be me, my boss and the other manager on the team presenting.

My boss would be doing the team introductions and overview of the team’s contributions. The other manager would be doing a magic show. Yes, you read that right. I would be hosting a version of Jeopardy, focusing on the application that the team develops. My boss and another team member put the question/answers together and I got to ad lib while picking contestants for each of the 6 questions.

I had a blast. Wonderful fun for all. Crazy enough, for those that know me, my jokes actually got LAUGHS. I’m used to people laughing at my antics and stories, but generally at me when it comes to jokes. Not so last Friday and I was slaying them in the isles. But when it really got interesting was after the entire show was over… but I’ll get to that in a moment.

Our team had 10 minutes… we took nearly 30 and about 15 minutes of that was to do the 6 questions I had. Most of that was spent quieting people down from laughter. The magic show was also well received, as it was themed regarding the issues my team regularly faces and most IT staffers there were subject to the same issues.

Our time was finished, and the manager of the second spotlighted team had a really tough act to follow. She admitted as much, and proceeded to spent the next 20 minutes boring us all with a horrible slide-show. I felt bad for her, in a way, as following our dog-and-pony show would have been difficult for anyone outside of a professional comedian. Such is life.

The rest of the time was spent and we were out the door, ready for lunch. It was a pot-luck along with burgers and drinks provided by our VP. This is where things got really interesting for me personally. As I make my way through the line and around the corner where the tables were, I hear a voice I had heard all morning, our executive VP, utter my name. Unbeknownst to him, I heard him saying to a couple people what a fantastic job he thought I did and how impressed he was.

Getting noticed can be good or bad, depending upon what you’re noticed doing and how you feel about what you are doing. Me, I had spent a small bit of time rehearsing, hoping for something just like this situation. Time well spent. But it gets better… 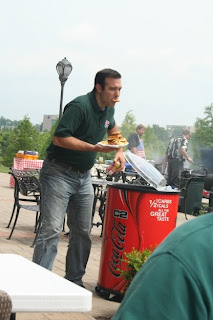 As I’m walking out to sit down at a table, I pass the drink container. My plate is a bit full, and I’m trying to eat my dessert first, as I realize I need to grab a beverage. While the smartest thing to do, for many reasons, would be to simply put my food down and come back for the can of carbonized sugary goodness, I decide to practice my balancing prowess and grab the coke now. Here is the result of this behavior:

Yes, I am just that smooth.

So, I sit down and begin to chow into that seemingly overfull plate, when low and behold, someone drops down in the chair across from me. The same executive VP who had just been so complimentary to me out in the food line.

The next 45 minutes were spent schmoozing up with the big boss of the division. We swapped project stories and our thoughts on how things were going. It was a lot of fun and I got to spend some time with the guy who could hold my career in his hands. I walked away from that lunch riding sky high, but it didn’t end there.

As I strolled down the hallway, back to my cubicle, my director pulled me aside. He tells me with a smile that I really screwed up today. I inquire what it was I had done this time and he says that by putting on such a great show that I would definitely be called on again in the future to do more of the same. Definitely a good day of work for me!