What does a five year old want more than anything else for their birthday? A party with friends at the local pizzeria / arcade. In our town, that would have been the relatively short-lived restaurant Paraquet Pizza, and I would have been that newly minted five year old. No, the image that accompanies this post isn't the pizzeria in question, but if memory serves me correctly, it was about as fancy as that.

There were probably no more than ten children my age at the event. I have vague recollections of balloons, but I definitely remember one of the gifts... a G.I. Joe survival belt. This toy came with a bunch of pieces of (plastic) survival tools, but the piece I remember most is the canteen. I don't think I really drank out of it more than a time or two, mostly because any water put into the canteen immediately tasted like plastic, rendering it nearly undrinkable. I have no idea what chemicals must have been used in producing this toy, but I expect that they would not be allowed today.

Other than that, I remember how few video games I actually got to play. The place didn't close down for a party as small as mine, so they didn't open up the games for free play. More is the pity. I had hoped to have free run of the place, playing to my heart's content, but that did not happen.

Still, it was a worthwhile party and I was happy to have had it. 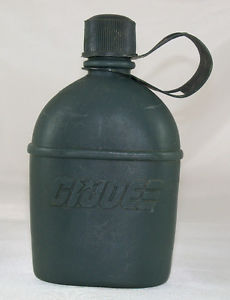