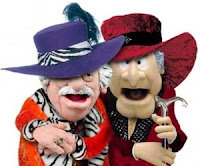 I’ve blogged about him before, but I just have to say it again, Jeff Atwood is the man. A few months back he wrote an awesome article about “New Programming Jargon” that I meant to bring to everyone’s attention but time got away from me and I’m just now getting back around to it. I highly recommend the read, but suggest you read it either by yourself or when around people who don’t mind you cackling with laughter for about 15 minutes. It really is that good. Let me give you a sample…

Hooker code: Code that is problematic and causes application instability (application “goes down” often). “Did the site go down again? Yeah, Jim must still have some hooker code in there.”

That was #29 on the list and by far my favorite on the list, mostly because I think Statler and Waldorf were the two best Muppets by far, but also because I’ve known far too many developers who wrote ‘Hooker code’. That said, I’m sure that lots of developers have thought my requirements were of an equivalent quality to their hooker code, so I guess we’re all even.
Many of the projects I have been on have each had their own terms created to describe the activities surrounding the work. The sad part for me is that 1) I can’t remember / have blocked out all the things we came up with and 2) even if I could remember, I could almost guarantee that they wouldn’t be funny to anyone who didn’t live those projects. Still, Atwood’s list brought back good feelings, if not memories, to me and I hope it did to all of you as well.