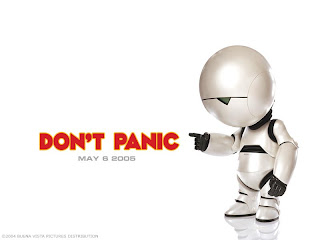 To say that my job has been chaotic over the last 3 months would be a mild understatement at best. I think the late, great Douglas Adams can best sum up the last few months for me:

I love deadlines. I like the whooshing sound they make as they fly by.

Back about 3 months ago, I went into a meeting with my department’s VP, expecting to walk out with 1/3 fewer team members and 1/3 less responsibility. I was overloaded as it was and had been told my job needed additional focus on a single, strategic project. What really happened was I walked out with 33% more team members, 50% more responsibility and an entirely new reporting structure. Needless to say, I was a bit surprised, but pleasantly so.

This role has been a lot of fun and includes a lot of additional challenges, all of which are in the direction I want to be taking. Its kind of funny that the things in my job I least enjoy (although I do enjoy all parts of my job, its just that I enjoy some parts more than others) are the ones that are most related to my old role. Nothing bad there at all; I just really enjoy the new stuff I’m getting to do.

But along with all those additional challenges come the realization that I can’t do it all; that I can’t be everywhere at once. Not that I could before, but the realization is just more obvious now than before. I’ll be the first to admit that I’m stressed out, often frazzled and in major need of additional sleep. My mind is racing all the time and my focus is fractured more than a glass vase dropped from the Eiffel Tower.

Which is why this blog post, about the effects of being ‘busy’ rang so true to me. There were a few lessons that popped out at me from reading this:

First, if you’re going to be the best at what you do, be prepared for a LOT of repetitive work. That doesn’t necessarily mean filling out forms or shuffling paper, it means spending the majority of your productive time being productive, not just going through the motions. This is hard; it requires drive, determination and all kinds of overused and poorly understood buzz words.

Second, you’ve got to focus on that work. This is the part of the article where I realized that my analysis skills were atrophying from lack of use. I’ve spent the last few months in meetings 75%+ of my days. That’s not necessarily a bad thing, but it does mean I have less time to spend in focused practice on my actual role.

Yes, much of what is accomplished in those meetings is also part of my new role. One of the things that I enjoy about my organization, especially compared to some really dysfunctional former employers, is that we actually seem to accomplish things in meetings. Wasting every hour of the day in useless meetings really stinks, so I know I’m fortunate to not spend the majority of my time that way now.

Which is where I come to the next lesson of this article: attitude. There have been times, especially during those meetings I feel are rolling around in circles, where nothing really gets accomplished, that I just want to storm out and 'go get some real work done’. This rolls over into my non-work life as well. My evenings have been filled up with processing email that wasn’t even looked at during the week. I’m a firm adherent to the Inbox Zero philosophy, so a box with dozens of unread emails makes me twitch like crazy. Its something I just can’t help but comb through, no matter how much I would rather be reading a good book (or writing on this blog).

And this brings me to the last point, one not brought up by the authors of the study, namely that being great requires sacrifice. If the 'average’ players in the study practiced their instrument 2 hours per day and the 'elite’ players spent 6 hours in study, that’s 4 hours the 'elites’ could have spent elsewhere, but chose not to do so. Being great, or at least doing great work, means not doing non-great things.

I think it is this last point that is what is the hardest thing for me personally about my job. I am thankful that I get to spend my time doing a lot of good things; I just wish I got to spend more of my time doing great things.

So that, in a very wordy nutshell, is exactly why I haven’t been spending time on this blog in a couple months. I’ve missed you all, Better Projects readers. I’ve missed discussing topics near and dear to the hearts of those of us who do projects. In short, I missed trying to work out how to be great with you all. Lets not be apart so long ever again. I won’t promise not to stray for short times, but I do promise to always return.