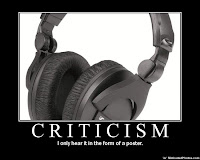 This post originally appeared on BetterProjects.net on February 24, 2010.
One of my favorite writers and all around commentators on life, John Scalzi, just did an interesting thing over at his blog, Whatever. You see, Scalzi has been nominated for two Nebula awards this year, but as he is a regular guy, he doesn’t really let it inflate his ego much. John is very aware that not everyone appreciates or even likes all of his work. Thus, he posted a couple of ‘One Star Reviews’ by readers of the two books that have been nominated for awards.
I find this concept fascinating. Julian Sammy of the IIBA and I had a discussion recently about how you just can’t please all of your stakeholders all of the time. My lament was that no matter how hard I worked, no matter what document format I used or how many revisions I performed, I would never satisfy everyone with my work. It is even more frustrating to know that there are some stakeholders who will tear you apart for your work, yet the quality of their work is even worse!
It is with that perspective that Scalzi’s intentional display of criticism of his work is so enlightening. Here’s a guy who only gets paid if people like his work yet he is still willing to step out and talk openly about people who do not enjoy his work. Its even stranger that he does this immediately prior to a contest where people are voting on the quality of his work.
This is a kind of brutal self-honesty and humility that we should all bring to our work. When people review our work, we should all take a view similar to John’s. We know that not all of our stakeholders will be happy with our output, but we should value their input enough to take it seriously. Do I think either of the criticisms John posted will greatly impact his work? No, but the fact that he’s willing to think about it and publicly draw such attention to the criticism is different enough that we should stop and take note of it.
Wouldn’t it be great if we all worked in environments where criticism is accepted as well as it is by John Scalzi?
Picture courtesy of farther off the wall.