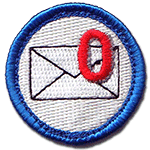 I love finishing something. Being able to check that item off my list is an awesome feeling. I’m a huge fan of the Inbox Zero concept because of this. This is why items like the Cult of Done Manifesto makes me so happy. For those who don’t want to click the link (although I suggest you do for the cool poster), here is the short text of the manifesto:
Point #2 is by far my favorite of this chart. Its freeing. I know my PM friends get frustrated with me when I say a task is ‘pretty much done’. This isn’t a situation where I’m trying to get them off my back about the status of a task, but a way of saying that its as done as I know how to make it. It is an acceptance of the large amount of ambiguity in life.
Point #4 just makes me laugh.
Point #10 is so true. That doesn’t mean that you don’t have a new task that looks exactly like the one you just failed at, this time to do it correctly, but it does mean the original task is done.
Point #12 is pretty much this entire blog. :-D